Why Is It Called The Stone Table? 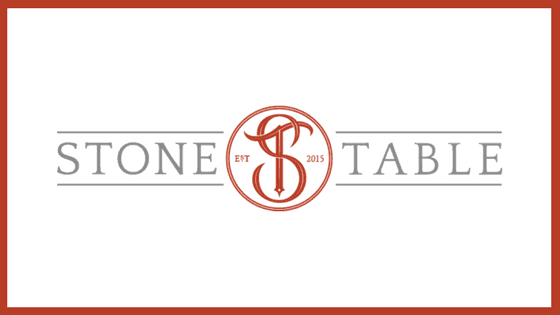 My wife and I spent a great deal of time naming our kids. We wanted classic, simple, sweet-sounding first names for our daughters, and so our girls were named Emma and Anna accordingly. With that naming strategy, we established an unintentional pattern (vowel, consonant, consonant, vowel) that produced a bit of an OCD quandary when our son came along a few years later.

What boy’s name could possibly continue the pattern requirement? We were just days away from christening him “Otto” (ok, I was days away) when we landed on Austin. While it broke the letter streak, it likely kept him from becoming a wedgie victim on the school playground for years to come.

What’s in a Name?

While our kids’ first names are the result of parental preference, their middle names have deep and historic meaning to us.

Lorraine was my Aunt, my mom’s oldest sister who was really more of a mother figure to her and our whole family. She was never able to have children of her own, so this name speaks of both heritage and honor.

Noel points to Christmas, the coming of our Savior into the world. Since Anna’s original due date was Christmas day (she was actually born two weeks early), we thought this was an appropriate reminder of our beautiful redemption story.

James was my wife’s maternal grandfather, a giant presence in the family both physically and spiritually. He died way too soon, but his impact on everyone he came in contact with has lived on for generations.

Names mean things, and even when others don’t know the origins, they still carry the vital DNA.

The Stone Table is no different. When we relaunched our missions arm in 2015, we knew we wanted a name that carried the essence of what we were all about. But how could we synopsize that exactly?

While we began as a real estate company built to provide quality affordable housing and give money to missions, neither of those things really described the root. What inspired our founders to start this journey?

It was a simple belief in the holistic resurrection and redemption power of the Gospel.

As a fan of the author and theologian CS Lewis, I began scouring his books for suitable allegories. Few writers have ever been better at illuminating deep spiritual truths through fictional stories. I found an exhaustive glossary of terminology, characters, and places from the Chronicles of Narnia series and began pouring over it for inspiration. The perfect name stuck out on the page like it was highlighted in neon:

The Stone Table (or Aslan’s Howe) is the location of Aslan’s death and resurrection.

What better way to remind ourselves of what we do every day? To those unfamiliar with the Narnia series, the name speaks of a regal and epic gathering place. To people of faith, it shouts the Good News of Jesus!

Tables are gathering places, and The Stone Table is a Gospel gathering place. We’re bringing together pastors and businesspeople, entrepreneurs and missionaries, all for the sake of the Gospel in the marketplace and around the world.

Pull up a chair, it’s time to find your seat at The Table.