My Wife is (Supposed to Be) Heading to Egypt

Mandy and I have been watching the Egyptian political crisis with extraordinary interest. Her name is printed on a plane ticket scheduled to leave all too shortly for this volatile area of the world, where military tanks roam the streets like minivans as protesters violently clash with the Mubarak regime.

When I think of Egypt, my mind effortlessly conjures up images of camels, pyramids, and Yule Brenner. But my wife is (was?) heading there to encounter the effects of extreme poverty. To work with people who have literally built a community among the city trash dumps. (This story may help you re-frame the romanticism and understand a small piece of the unrest).

Now it appears the only Egyptian flights any Americans will be taking are out of the country. We’ll just have to wait and see.

Admittedly, I probably understand as much about the Egyptian political environment as I do about fixing my furnace, and the last thing we need is another ignorant American spouting his opinions about a global crisis he only thinks he understands.

But something hit me square in the face as I watch this unfold. Something that hits close to home. In me.

Yet our human nature is to control. To demand our way. To gain power and then preserve it. To manipulate the behavior of others from the outside-in.

We see it in governments. In businesses. In churches. In families. In every kind of human interaction.

What we’re watching unfold in Egypt is ugly. It makes us angry. And rightly so. But at its root is something that resides in us all. A sinful desire to hold all the marbles.

Which is probably why Jesus’ example is all the more mind blowing. That the Son of God, at the pinnacle of His earthly influence, would give up His power. Lay down His life. Relinquish control. In fact, it was in letting go of Himself that He actually changed the world forever.

Maybe Mubarak should learn a little something from Jesus.

Maybe I should, too.

In light of all the stellar economic indicators and the financial pressures of Christmas, I know many of you have bags full of extra money laying around you’re just dying to get rid of, right? (Bags of small, unmarked bills with warrants attached to them don’t count).

In all seriousness, this video highlights a project we’ve adopted in a little slum off the coast of La Ceiba, Honduras.  A place that has become very special to us at City Community Church.

If you’re looking to do year end charitable giving, this would be a worthwhile investment.  This project is making a tangible difference in the lives of some amazing kids. Kids who wouldn’t have much hope without you and our partners at Mission of Mercy.

Thanks to a generous $10,000 donation, we only need $15K more to complete the final phase of this center (that also acts as a local church for the community).  If you’d like to help, you can click here to donate online, or make your checks payable to City Community Church (133 W. Market St. #102, Indianapolis 46204).

Just make sure to include “Fifteen to Finish” in the memo line for both online and physical contributions. All donations are tax deductible and can be claimed on your 2010 taxes if postmarked by December 31.

Give a gift of hope this Christmas, and then write it off on your taxes!  “It’s the gift that keeps on giving Clark…”

I Hate When People Tell Me About Their Missions Trips: Honduras Day 7

I hate when people tell me about their missions trips. Like I’m supposed to share their passion. Feel what they felt. Really. Come on.

So I’m not going to tell you anymore (at least for now). I’m going to let a couple of other guys do it.

This is raw video footage from our team’s download session early this morning. One of our guys, Andy Wiseman, wrote a song from the overflow of his experiences in Honduras this week. This is just the last chorus. Oh, by the way, Andy is almost completely deaf. Yeah.

And then our resident Puerto Rican, Mike Perez, slayed us all with another of his spoken word pieces you have to hear (I have his permission). So not right Mike!

You want to listen. 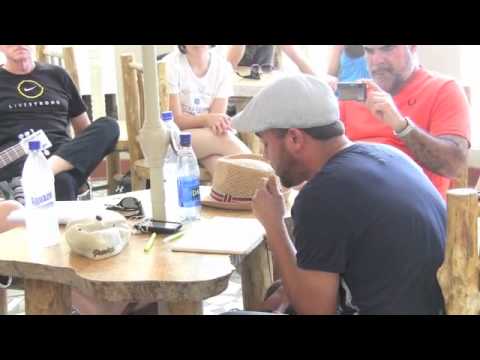 Heading for the airport at 4am, and taking more home with us then we ever could have brought.

Today was our last at the projects. We packed up the tents, the crafts, the dulce (candy) for the last time on this Honduran adventure.

Time to head home.  But the damage has already been done. None who have walked these streets, sat in these homes, interacted with this beautiful people, will ever be able to scrape the images and encounters from our minds.  Nor do we want to.  But will this week really change us?

I guess that remains to be seen.

Love can’t be an event. Not something we block out for a week on our busy calendars.  Not something that stays here in Honduras as we head back to our real lives in the United States.

But that will be the temptation.  The direction the current will naturally try to take us as the intensity and focus of this controlled, planned experience abruptly morphs back into the comfort and familiarity of home.

That’s why trips like this can’t simply be something we do. Time moves on.  The trip comes and goes.

These experiences have to be about what we become.

Tomorrow we have a day to relax and process together before heading for home.  A day to drive these encounters into our DNA.  To make sure this act of worship called Honduras 2010 wasn’t just a self-righteous photo-op.

As we loaded the bus this evening, almost too surreal to believe, a rainbow appeared in the rain clouds engulfing the mountains that look down on Las Delicious.  Coincidence? Maybe.  Cliché?  Could be.

Or was God actually trying to remind us that there is hope?

Hope for all of us.

Fix You isn’t only an epic song by the band Coldplay.  When you come to a developing country like Honduras, it becomes a constant battle you fight.  And lose.

Today we visited another impoverished neighborhood in La Ceiba, home to 13 children sponsored by people from City Community Church.  The kids were energetic.  Grateful.  Full of joy.

But the conditions were what you’d expect in a neighborhood slum.

I can’t fix what I see here in La Ceiba, Honduras. I want to.  I want to bulldoze these wooden shacks and their pitiful dirt floors.  I want to build suitable structures to house human beings.  I want to make sure every child has two parents, and every parent has a respectable paying job.  I want to stop people from living this way.

So many layers to any mess that creates this kind of poverty. Corrupt politicians.  Socio-economic injustice.  Drug cartels and gangs.  And no ability to imagine a different future.

Poverty cycles.  And then recycles.  You can’t unwind it in 7 days.  You can’t just make a few phone calls, call a town hall meeting, give them the Eliminating Poverty for Dummies book, and fix the system.

But you can help one.

Mandy and I can help Jorge.  The LaGranges can help Anna.  Bill can help Caroline, and the Browns can help Jose.  Andy can help Angel.  Lindsey can help Kenneth.  Mike can help Isis.  And CityCom can walk alongside a little block-wall church called Lilly of the Valley in the outskirts of an impoverished Honduran neighborhood.

But maybe more importantly they can help us, too. Help us lose our self absorption.  Help us separate our understanding of God’s Kingdom from our American way of life.  Help us find Jesus living here among the least of these.

Some days I wonder if those aren’t actually the things that need the most fixing.